My email box is full. Helpful tips for holiday shopping. Soothing advice for stress relief. Ways both material and spiritual to part me from my money--of which less and less is coming in. Congress gives the present of sequestration, furlough, giving less and less until my cup runneth over with tears but not contracts. 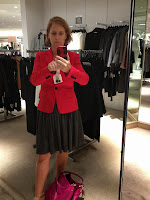 Give. Take. Buy. Do unto others. Take care of yourself. You're too late. You're not enough. You are too much. It's never too late.

Other messages beckon from the spiritual inbox: I am taught, cajoled, comforted by the teaching that all that I need in this moment is here, now. All it takes is becoming aware of the bounty that fills my every waking hour. How wise. And these, too, I can purchase, download, gift and share. Wisdom for the masses.

From the personal to the global to the political. Right vs. Left, a battle for our times. Since when is selfishness a Tea Party? Al Qaeda operatives destroy Iranian embassy in Beirut, collateral damage in Syria's brutal civil war. Is it any wonder that Toronto's mayor and a freshman member of Congress escape to the ravings of cocaine?

And how can we warn teens off that trap of escape that even their would-be elders and wisers can't resist, teens with their flourishing of brain cells firing, misfiring, rewiring. Miley Cyrus is doing it. The Olsen twins are pushing it. Let the wind blow and me inside it: the pressure is too much.

It is our parents' fault. And ours to our children. We couldn't hold on. Didn't know how to pass on the strength to carry on. Forgot that the anthems they marched to in the '60s taught: the answer is blowing in the wind.

Just breathe. In-and-out. In-and-out. Go within. Tune out the noise. This is what the gurus teach an ever wider, more needy audience. But all these prepositions mean nothing when the typhoon twists all around us. When the wind is blowing this strong it is hard to breathe.

It's getting darker day-by-day, but the holidays are coming. We're all supposed to be merry and bright. Families give us strength, and tear us apart. We have trouble holding ourselves together. We don't have the answers, for they lie within. Hidden.

Silence the noise. Our thoughts are not who we are, they are just stories we tell ourselves. Change the story. (I am trying).

Be thankful. Abundance lives in the fact that I am here. Breathing. At this moment alive. Right now the sun is shining and the sky is blue. The skeletons that were recently leaf-covered stand straight outside my window. I am here now.

Just breathe.
Posted by Robin Stevens Payes at 9:23 AM No comments: