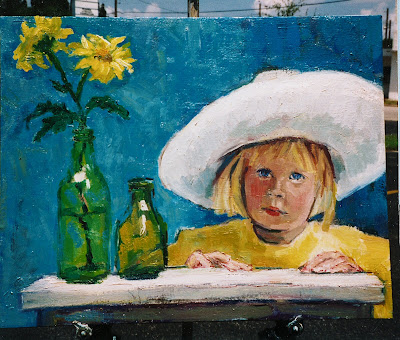 Not Van Gogh's Sunflowers
Don't quit the day job. For artists of every hue, this has become conventional wisdom. After all, Van Gogh died destitute in 1890, yet just under 100 years later, in 1987, Japanese insurance magnate Yasuo Goto paid $39,921,750 for Van Gogh's "Still Life: Vase with Fifteen Sunflowers" at auction at Christie's London, at the time, a record setting price for one of the now venerated artist's work.

What of talented artists who today labor under guise of anonymity, or try mightily for recognition in a marketplace where "what is art" is defined as subjective and "what is popular" might be a better guide to how collectors and amateurs alike purchase paintings, sculpture, multimedia and other pieces?

Or what of this: the award-winning painter and sculptor Dorothy Silverstein Stevens who has her first one-woman show at age 85 to great acclaim but no public notice; whose work is admired but undervalued; who sells work to admiring friends but really deserves to be in public collections?

Now 90, with a life of art behind her, she paints out of passion and inspires awe among admirers. Price is not the object, yet the artist and her art deserve to be appreciated. For what is art if no one sees it? Dorothy Silverstein Stevens creates just such inspirational artistry. I post one of her paintings here: you be the judge.
Posted by Robin Stevens Payes at 8:41 PM No comments:

D.C. on the Fringe 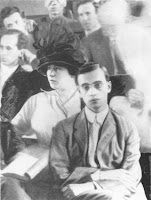 Speaking of off-beat, Washington's 2008 Fringe Festival is currently in full swing. According to its organizers, the Capital Fringe is about "unjuried, risk taking, independent performing arts." The city provides a cornucopia of performances - more than 600 individual performances involving over 200 companies in 30 venues, located all around the District. A moveable feast.

The festival inspires artists and arts organizations to venture into uncharted territory. So it was fitting that a Theatre Lab production called Parade would also push the edge of entertainment. A critical hit on Broadway during its brief run in 1999, the musical was conceived and directed by Hal Prince. It is not a musical in the traditional sense of the American musical, but a serious look at a little examined time in American history: the trial and lynching of Leo Frank in the Atlanta of the 1910's - a place still unashamedly racist and anti-Semitic. The crime Frank was accused of, murdering a 14-year old factory worker in his pencil factory, and the subsequent trial where witnesses were coached to testify against this Jewish man from Brooklyn who was and would always be a stranger in white Southern society, is portrayed affectingly by Buzz Mauro.

Musical it is, though a tragedy at that. According to the program notes, the musical score is one of the toughest in all of musical theatre. Atonal, with complex harmonies, an experience professional company would still have difficulty telling this long, complicated story through music and dialog. Performing in the auditorium of a church near the National Museum of American Art and the Verizon Center, this cast - a mix of amateurs, professionals and newcomers, teens and adults - brought the story to life with uneven finesse but great passion.

And the story of Parade, difficult though it may be, is worth hearing. Fitting within the context of the Capitol Fringe Festival, this was "unjuried, risk taking" performance artistry. A moveable feast, Washington's cup overfloweth. I urge natives and visitors alike: partake.
Posted by Robin Stevens Payes at 5:48 PM No comments: