Note to Self: I Have Promises to Keep 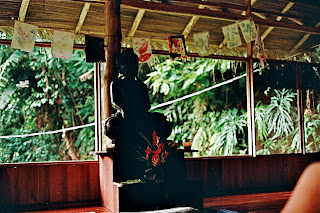 I was grabbed by Orna Ross's Creative Intelligence blog post about the paradox of creative intention. She advises us to look at intention, not as a plan, but as a guiding principle, recognizing that despite the force that focused intention can create to make things happen, there are equally forceful and opposing actions being served up by the universe that may derail us from achieving what we really want.

For the sake of clarity, I am listing "Orna's paradoxes" here:
* To clearly visualise what we want, then let go of any attachment to the outcome.
* To be prepared to do our part while allowing life to do its.
* To work well and make appropriate efforts while also playing well, with lots of rest, relaxation, contemplation and meditation.
* To be persistent but not bull-headed.
* To work towards success while welcoming failure as a learning opportunity.
* To be resilient but not self-satisfied.
* To know what we want at the same time as knowing we are complete without it.
* To fully appreciate what we’ve already (co)created while directing energy towards what we’re (co)creating now.

But what about the question of setting clear intentions - and holding them central? Case in point: my novel in progress, After the Party's Over. Already two years in the writing and 90+ pages in, I have been stymied for months over forcing my seat in the chair to move the plot forward. I am waiting for the main character to tell me what's on her mind. She has revealed quite a bit recently, but I find my eyes glued elsewhere, not to her.

The paradox of inattention has derailed my best intentions. What's keeping me from writing?

First, paying clients. This is a good thing, as we have to eat and pay the mortgage. But there is a paradox. In my social marketing business, I help scientists, educators, researchers, and health professionals tell their stories. Storytelling still - just not my own.

Next, as part of my professional toolkit, I use social media. My professional blog offers a way to amplify client stories, as well as initiate discussions with colleagues and engage in conversations about social marketing. In my novel, some of the characters text and tweet, but no serious social networking is keeping them from living their lives as I write them.

Then, of course, Twitter. I am pretty judicious about turning off the Tweetdeck when it comes to meeting client deadlines. Just not my own. In fact, I had every intention of writing three pages a day during November or, in tweet-speak, #NaNoWriMo. That is, until client deadlines interfered. So I postponed my personal NaNoWriMo for December. And here we are, mid-December, and my poor main character Ellen is still frozen in time waiting at the airport in Detroit, having met up with her ex-husband, the one she walked out on, leaving their three children to his care years before. They are suspended in time until I get my butt on the seat and fingers on keyboard to write them a surprise encounter.

Family, college applications for youngest son, dogs...these are things I have let get in the way.

But it is still December, when miracles do happen. I have high hopes for the week between Xmas and New Year's, when NOTHING HAPPENS IN WASHINGTON, to turn my attentions to fulfilling my better intentions before another year slips away.

Because storytelling is what I do. Fully recognizing the paradox in this plan, my intention is to make my own at least as important as everyone else's.

What about you?
Posted by Robin Stevens Payes at 12:13 PM No comments:

Families that Play Together: The Ultimate Block Party 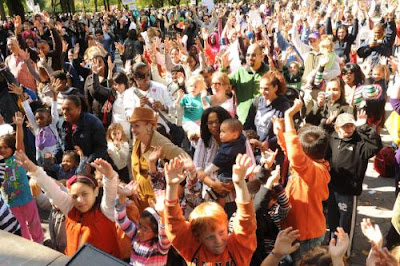 Simon Says, "Play!" That was the message for the more than 50,000 parents and children making the pilgrimage to Central Park on October 3. While beautiful fall weather played a key role in its success, the Ultimate Block Party (UBP) organized by Play for Tomorrow, was undoubtedly a hit for the nursery through young teen set who engaged in the vast array of activities to encourage kids - and adults - to engage in creative fun at the park's Naumberg Band Shell.

Families came, teachers streamed in, caregivers from all over the city, and even from as far away as New Jersey, Delaware and Maryland. While Gordon from Sesame Street led a sing-along of songs familiar to young children and grownups alike, the myriad other happenings families could explore, decorate and climb on - from the giant brain collage sponsored by the Children's Museum of Manhattan, to the half-million green Legos (to demonstrate that one doesn't need color or special adornment to encourage builders' imaginations) growing into an intricate Lego City - ensured a continuous and enthusiastic crowd at each play station. 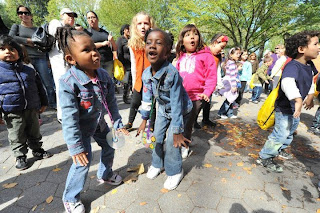 Stroller jams were seen in the vicinity of a corral of cardboard boxes, where kids eagerly clambered, colored and took cover in newly make-believe caves. PlayWorks offered a chance for children from all over the city to play together in hula hoop contests, four-square and playground games. Sidewalk drawing, drumming and dancing gave families an excuse to engage in the spontaneous silliness, brain and body stretching we normally associate with growing up. Clowns without Borders bent from their high stilts to shake awestruck little hands.

There was a serious component to the joyous cacophony, one that "Play Doctors" wearing white lab coats took the time to explain to encourage parents, teachers and caregivers to incorporate play at home and school on a regular basis. Scientists have confirmed through years of research that play is an invaluable component of child development encouraging socialization, creativity, emotional adjustment, and brain development. To understand the link between play and learning, organizers gave everyone a "Play Book" at the gate - a guide to how kids learn through play and activities to take home. The UBP Web site links to various articles and research reports documenting play's effectiveness. According to Play for Tomorrow organizers Dr. Kathy Hirsh-Pasek, a faculty member and researcher on play and learning at Temple University, and Dr. Roberta Golinkoff who studies play, language acquisition and learning as a faculty member at the University of Delaware, the current school climate in which children as young as five must forgo recess for "test 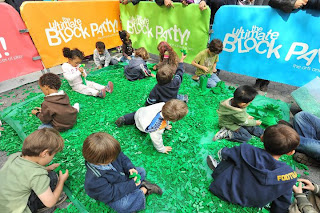 preparation" is taking the joy - but also essential opportunities for brain growth, exercise and motor skills development - out of learning. And yet, play is how children explore their world, create possibilities, socialize and learn empathy, say the researchers.

As Andy Ackerman, Executive Director of the Children's Museum of Manhattan and a co-founder of UBP, put it, "We knew the event was a success because all day long, what we saw was a lot of the back of kid's necks." Everyone was absorbed in activity.

The Central Park event is only the beginning of what organizers envision as a movement to put play back into learning. Other cities, from Baltimore to Denver, are already planning to host their own block parties, with distinctive local flavor. As UBP President Susan Magsamen noted, "The New York Ultimate Block Party may be the kickoff, but it is our vision that cities all over the country will create their own festivals to bring home the art and science of play. We have to make sure parents, teachers and caregivers understand play is fundamental to learning - that it shouldn't happen on just this one day, but everyday."

"Sunny days, Sweepin' the clouds away...," sang throngs of smiling children as Gordon led them in the Sesame Street theme song. It's nice to remember that play is essential to learning. More important, it's vital to a child's development and well-being. Even more to the point, play may be a necessary ingredient to keep our brains flexible, our bodies fit and our emotional life in balance to create, innovate and learn through the lifespan.

So the next time your inner child calls you to stop work and go play - whether it's a walk in the park, a game of Scrabble, or chalk drawing on the sidewalk - pay attention to that voice.

Now go out and play - Simon Says!
Posted by Robin Stevens Payes at 11:16 AM No comments: