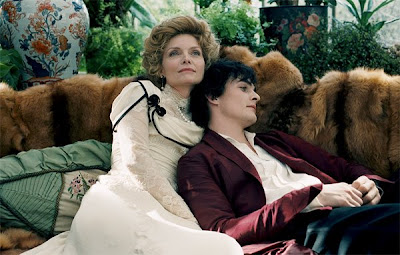 New Miramax film based on Colette's novels, Chéri, and La Fin de Chéri. Is it still taboo for a romance between an older woman and a younger man in our society? This was la Belle Epoque in France, where a "lady of the evening" (Michelle Pfeiffer) found herself too old to court the haute societe of the day but takes on the 19-year old son of one of her erstwhile friends and former rivals (Kathy Bates) and they find themselves, mysteriously, falling in love. But by that time, it is too late. A beautiful cinematic achievement, with lovely performances and gorgeous costumes.

What do we do make of the romantic love of an older woman for a young man today? Is that a romantic notion, or as the young woman who Cheri finally weds observes, do we still think of such liaisons as "debauched?" Is it okay for celebrities but not the rest of us?

Would such a pairing today end up in tragedy? What do you think?
Posted by Robin Stevens Payes at 10:55 PM No comments: